Earlier I discussed how I use a Roger Easy Pen and a Bluetooth remote microphone to try to help me in group and /or noisy situations.

The Roger technology fundamentally consists of FM transmitters and receivers coupled with directional microphone(s). The receiver is a small cube that attaches to a streamer and also some hearing aids directly.

There is some really good news in the world of Roger. Earlier this year Phonak released what they call Roger Select. I just call him Round Roger. 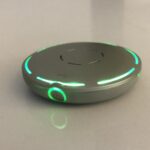 The device, about the size of a fifty-cent piece, takes Roger technology to a new level of assistance. It consists of six directional microphones that will turn on and off as it senses which direction speech is coming from. It is also better at detecting and screening out background noise than the Roger Pen.

One other great feature is that you can also manually pick which microphones you want on…or off. An example is a dinner with one other person but in a noisy restaurant. Set Round Roger close to the other person and turn on one or two microphones facing them and the others will stay off and not amplify the rest of the noise around you.

I have been using one for a few months now and find it performs significantly better than Roger Pen in group situations.

It also works great as a worn microphone by a single speaker. It has a magnetic clip so that it can be worn. When it is in that vertical position ir only turns on the microphone that is pointing upward. One of the best uses I have found for it is to have a passenger wear it while I am driving. Roger cuts road noise and focuses on speech.

An additional user friendly benefit is that it eliminates the need to manually point the Roger Pen toward the speaker in a group to get the best result…or alternatively using it as a talking stick and have speakers pass it around.

Round Roger is much less intrusive to the situation. It just sits there and it does the job of pointing its microphone toward whomever is speaking. Now if everyone at the table is talking over one another…well Round Roger finds that just as confusing as we humans do.

Its not a perfect technology, but it is a serious improvement of an already good technology for aiding the ability to hear in social settings